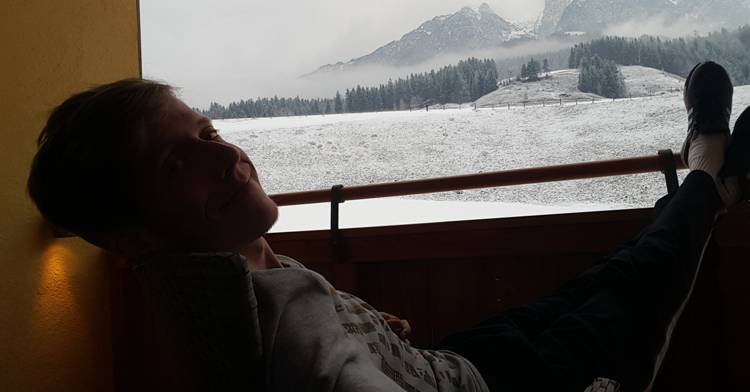 About freelancing and how your life suddenly does a 180 on you when you become your own boss – often for better and sometimes for worse.

I remember July 1st 2016 rather distinctly.

It was a fairly muggy Friday, not massively hot but unpleasant in its humidity. I had only just gotten rid of a cold that I had caught during all the rain in Lille at the European Championships. Obviously I wasn’t able to shake it off during an equally rainy Gerry Weber Open the following week.

Why do I remember it as precisely as that? It was the day I jumped into the wild, rough ocean called freelancing.

So this past year then – it’s been a rollercoaster. I’m mainly contributing to Inside Out Tennis where I do match recaps, news, interviews, previews, features and more. A little bit of everything.

Tennis itself had been a job for me previously (I do have a coaching degree, y’know), writing about tennis had become much more than a hobby and something I do on the side. For that reason I decided to take the plunge and leave my academic career and work behind for the time being. So far it’s worked out ok, maybe even a little better than I had anticipated. Because at the beginning you anticipate things to come down crashing and burning because it’s all fucking scary in a way.

Freedom of freelancing – but not quite freedom at all

Honestly, I got to meet an awful lot of fantastic people I wouldn’t have met, I got to work on things I probably wouldn’t have had the chance to work on otherwise. Whether that is freezing my behind off as social media manager for the International Biathlon Union or really going all out for the European clay court season and grass court lead up events, spending over nine weeks on the road. Loved it.

On the flipside of the coin, there have also been a couple of struggles: After the first three months (July, August, September) I felt like a dead man walking. Crazy hours (220+h/month) and a complete shift in working hours left me with an empty tank. The only week I took off of work in the past year was in early October 2016. It doesn’t really look like it’ll change anytime soon.

The biggest problem, however, has been going back and forth between working on-site and working from home. On-site you feel a buzz, a positive electricity regardless of the sport and while sometimes you won’t be more productive in quantity, it vastly improves quality I believe. Returning from tournament or event sites to your own four walls as an office is not unlike a really bad hangover – to me anyways.

Trying to get used to working from home again.

The struggle is so real today.

You’re happy you’re back home, to see friends and family you haven’t seen in ages. But it’s not time off, you have to structure your days somehow, you have to find ways to remain productive even though the surroundings aren’t nearly as „inspiring“ and a complete opposite to tournaments. You suddenly find yourself searching for that mystical work-life balance again – something you never have to worry about when you’re on the road – only to realise it’s never really in equilibrium. It probably didn’t help that I moved places in March and that I’ve barely been at home in the past 4 months. To many this will sound like a blissful problem to have; I completely get that. But sometimes it seems as though „There’s no place like home“ turns to „There’s no place called home“. As we all say in tennis: it’s a process.

On the whole the past year has been full of challenges. Maintaining friendships and relationships has been tougher, being your own boss and telling yourself to stop hasn’t been easy, accepting that the day only has 24 hours has been frustrating, collecting every bill and doing taxes has been the bane of my existence. And there’s been the odd car crash, literally. Having said that, the learning curve has been steep.

Looking back at the past twelve months, would I change anything? No. Or very few things. For that I’ve had too much fun and the positives and the good times far outweigh the bad.

In the past year I’ve been able to do things that many would love to do and maybe haven’t gotten the chance to. I’m in no way taking that for granted.

Sappy paragraph: This also gives me a chance to say thanks to many people for their help. Help comes in all shapes, ways or forms. Help is appreciation when you do something well, help is others pointing out your mistakes or when you fucked up, help are words of encouragement and help is people teaching you new things everyday. You don’t get anywhere without any of those things.

Do I have a couple of wise words for those who plan to leave the safe harbour and sail out on the wild ocean of freelancing? Yes. I do.